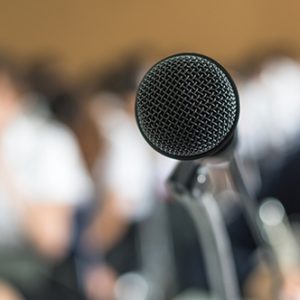 And virtually every week, I get to listen to a guest speaker.

And that means that, virtually every week, I get to hear someone introduce a guest speaker.

And over 90 percent of the time, the introducer fumbles, stumbles, and generally makes a mess of the handoff.

I’ve been a Toastmaster graduate for a lot of years (and if you’ve not been to Toastmasters, I highly recommend the organization) and one of the things they emphasize is how to properly introduce a speaker. So, here’s Lesson 03 of our Biz etiquette series:

How to Introduce a Guest Speaker

If you’ve been asked to introduce a guest speaker for your organization, you’ll want to be as prepared as possible. The truth is, sometimes you won’t have but five to ten minutes to prepare, but hopefully you’ll have lots of time.

You’re not going to share all this … and maybe none of this, but if you have the time, do the research. The better you “know” the person, the better the introduction will be.

And there you have it. Seven steps to properly introduce a guest speaker. And don’t forget, keep clapping until …